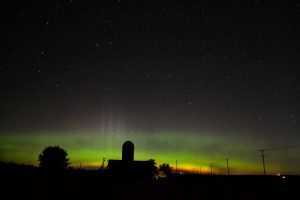 After moving to Wisconsin from Chicago several years ago, I was on a mission to try to see the Northern Lights. As much as I love Chicago, you can barely see stars there, let alone aurora. It was time to take advantage of getting a little further north (better for aurora viewing) and now dark skies were only 30 minutes away instead of 2+ hours.

It took several attempts to finally see the Northern Lights, but I finally had some success. More often than not, though, either clouds obscured the view, the show didn’t make it this far south, or I was too early/late getting out to see it.

Space weather is even more fickle than the clouds and rain we usually think of as ‘weather,’ so persistence is key for those of us in the “middle latitudes” who want to see the aurora.

These online resources were also really helpful on my quest to see the aurora:

Good luck on your own aurora quest!