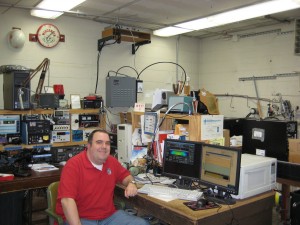 Working some DX at the BARS shack.

I’m just getting started out in the hobby, but have really caught the ham radio bug.

Ham radio has a little something for everyone (well, ‘everyone’ who geeks out on stuff like ham radio). Aside from the multitude of ways to communicate via ham radio — various digital modes, voice, and of course, morse code — there are also numerous contests, local clubs to get involved with, and public service opportunities.

When folks come over to my house and see the antenna hanging above the back yard, the second question I get (after “Ham radio? That’s still a thing?”) is: what’s the point of ham radio now that we have the Internet? For me, it’s still fascinating to be able to communicate with someone thousands of miles away with nothing more than a 100 watt transceiver and antenna. I’ve worked well over 100 countries so far, and am close to earning my ARRL DX Century Club award.

I’m fortunate to also have access to the equipment at the University of Wisconsin-Madison Badger Amateur Radio Society (BARS) ham shack. I like to visit the BARS shack over my lunch hour — the shack is just a short walk from my office, and it’s been fun to get involved with a club on campus.

To my fellow hams, I look forward to meeting you on the air!